We asked the two grand prize winners of the KUKAN DESIGN AWARD 2021 to share their thoughts on their winning projects in a Q&A format.

What we found in common between the answers of both winners is that they are full of love and passion for the project itself, beyond the framework of their own design work. I can also sense that they have great dreams and hopes for the “future” of their creations. 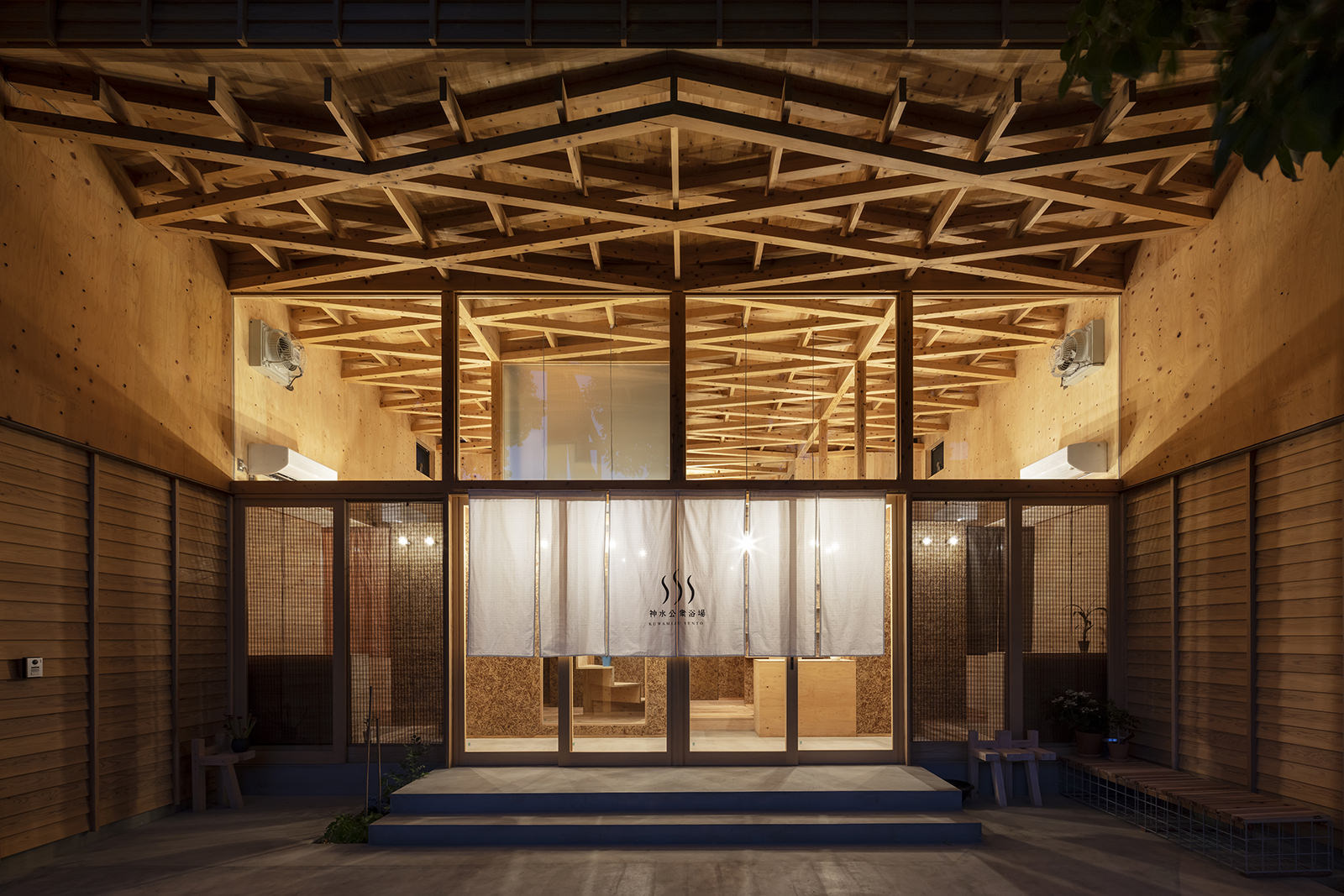 Winner of the Grand Prize of the KUKAN DESIGN AWARD 2021:

In the area of in KUMAMOTO City, where there is an abundance of clean groundwater, our client, the KUROIWA family, after experiencing the disaster caused by the Kumamoto earthquake in April 2016, enlarged the bath and opened it up for the town, and built a public bathhouse attached to their home. The family actually lives on the second floor. When he had to rebuild his house after the earthquake, he decided that if he was going to build a new house in KUWAMIZU, he wanted to help the local community as well as his family.

I asked the same question to both Mr. KUROIWA, the structural designer and the client of this project, and Mr. NISHIMURA, the architectural designer. It is interesting to see the different perspectives in their answers.

What were your thoughts when you came up with this design idea of “liberating the bath at home”?

Mr. KUROIWA : I was absent-minded, but unlike the structural design work I was undertaking, I had a feeling that it would be a physically demanding few months.

Mr. NISHIMURA：I was really looking forward to seeing how the children would grow up in the “house bath” open to the community.

The actual construction period was from October 2019 to July 2020. The earthquake in Kumamoto was in April 2016, so the idea was conceived four months after that. But still, what is a public bathhouse? In order to obtain a business license under the Public Bathhouse Law, they needed permission from the public health center, and were told to obtain approval from all neighborhood associations within a 2km radius of the location. It was impressive to hear him talk about this hardship at the Japan Spatial Design Award ceremony.

What was the most difficult part of this project? Was it the business license?

Was the cost reduction the most difficult task? Was that so? The two of you are in perfect harmony in this area.

On the other hand, what was the most exciting part of the project?

Mr. KUROIWA： On the evening of December 28, 2019, as it started to pour, after the erection was finished, it was the end of the work day, which is not usual.

Mr. NISHIMURA： When the construction work started to move forward with all the friends of the owner coming together one after another as site agents, builders and craftsmen, while it was difficult to find a builder under the severe cost conditions.

The joy of seeing the circle of people expand and the project begin to move forward is something that touches my heart. It was really good.

What is the key to the local character of KUWAMIZU SENTO?

Mr. KUROIWA： Underground water and the owner (KDA note: Mr. KUROIWA himself and his family) who was born and raised in

Mr. NISHIMURA：  The owner and many of the members involved in the construction are friends from the area.

The answer that the “people” represent the community is a wonderful and homey aspect of this project.

Was there ever a time when you felt like you were really going to fail in this project?

Mr. KUROIWA：  I was only thinking about making it a success, so there were hardships, but no setbacks

I feel that the “strength of the ground” of the project, which is connected with local people, is behind your answer that you never had any setbacks. Mr. KUROIWA, the structural designer and owner of the building, must have had a challenge to create an architecture that would not only be durable against earthquakes but also contribute to the local community. I admire the project for overcoming these challenges.

What new values have you discovered through this project that you hadn’t considered in the past?

Mr. KUROIWA： The fact that the designer was not only in charge of supervision, but was also involved in site management and carpentry, and understood the pain of others.

Mr. NISHIMURA： That the smallest and most private of houses has the potential to be the most public.

For those who are involved in architectural design, do you have any maniacal appeal points for professionals?

Mr. NISHIMURA： The modest way of life of a design engineer, which is mostly structural design. (laughs).

Mr. KUROIWA： A fabric sling for unloading and erection. It can also be used for moving, working at heights, and as play equipment for children (Tarzan, hammock).

Mr. NISHIMURA： After all, this is a terrazzo monocoque body for a public bathhouse bathroom. I didn’t know it was possible to create such a large terrazzo finish! I thought to myself. (laughs).

As the designer, do you have a message for the visitors to the KUWAMIZU SENTO?

Mr. NISHIMURA： In recent years, the frequency of disasters in Japan has been on the rise, but I feel that the sense of security in local life will be greatly enhanced if the architecture of houses, which is small but exists in the greatest number, gradually takes on a public nature. Please stop by the KUWAMIZU SENTO, which was created with this in mind by the owner.

My first impression of the KUWAMIZU SENTO was that their design was simple yet beautiful. However, the more I listened to it, the more I felt that the beauty of the idea and thought that went into its creation. KUMAMOTO is an earthquake-prone area, and as a part of the earthquake recovery efforts, they want to open up the baths in their own residences as public baths and use them as community baths in the event of a similar disaster. The owner of this building is also an architect, and the ceiling of the first floor is covered with crossbeams for earthquake resistance to increase the rigidity of the surface, and these beams are left exposed from the inside of the bathhouse to the entrance outside, creating a structural beauty and a stylish impression. The open entrance is covered with a curtain, giving the impression of a public bathhouse entrance. However, it also serves as the entrance to the owner’s own residence. The owner’s children pass by the watchtower and return to their home on the second floor. What a strange sight! Or maybe that’s how public baths used to be in the past. And this bathhouse is the home of the owner’s family. In the second floor of the house, the roof is constructed with the recently talked about CLT construction method in the shape of an arch, creating a space with few pillars and a high ceiling, creating a sense of openness. The result is a space with a sense of openness.

While thinking about the local community and expanding the possibilities of what individuals can do, this project is architecturally and design-wise viable, and will help revitalize the city. I would like to express my respect for this wonderful project.

BACK TO TALKS NEXT TALKS→